The Relax® Sauna is a personal sauna tent with a far-infrared ray (FIR) heat source. Quality distinguishes it from any other saunas.  It delivers a safe, complete sauna experience from its compact and portable design. Using patented and award-winning technology, it achieves positive therapeutic outcomes for a variety of conditions, at a fraction of the cost and effort required from other types of treatment. 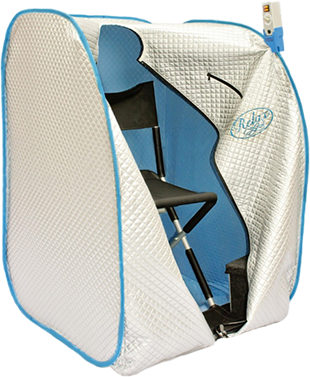 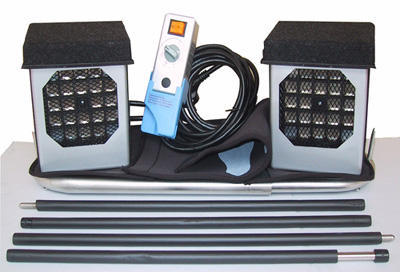 Complete the form below to receive a coupon for $100 of your Relax Portable Far Infrared Sauna.

The Relax® Sauna is a personal sauna tent with a far infrared ray (FIR) heat source. Quality distinguishes it from any other saunas.  It delivers a safe, complete sauna experience from its compact and portable design. Using patented and award winning technology, this dry home sauna achieves positive therapeutic outcomes for a variety of conditions, at a fraction of the cost and effort required from other types of treatment.

The video above explains what the Relax Sauna does and how its technology makes it unique among far infrared saunas.

What makes the Relax Sauna stand out are its Emitters of Far Infrared Energy.  They are the generators, using semi-conductor chips to filter out all of the Non-Resonating Far Infrared, the mid infrared and the near infrared – so that you get a Pure Far Infrared Energy – which is the ONLY ENERGY FREQUENCY which RESONATES with the WATER CELLS in your body, and PULSATES them.

This is where the Magic Happens.  All other benefits that happen when you bathe in front of the Relax Far Infrared Energy are the BY-PRODUCTS of what happens when your water molecules start pulsating?  Whenever we need Nutrients – whether food/herb/supplements or Air Nutrients or Light Nutrients, we also need Movement. Movement and Nutrients are the key to a Healthy body and Healthy Energy.

The Relax Portable Far Infrared Sauna gives you Movement, more so than any other sauna, because the Relax Sauna technology gives you a more focused energy in addition to being of greater wattage. This creates a much greater impact on the water molecules, and hence greater detox, greater micro-circulation increase, and greater impact on the parasympathetic nervous system and on the mitochondria.

The Relax® Sauna is a personal sauna tent with a far-infrared ray (FIR) heat source. Quality distinguishes it from any other saunas.  It delivers a safe, complete sauna experience from its compact and portable design. Using patented and award-winning technology.

All portable far infrared saunas include a carrying bag and chair.

The manufacturer warranty for chair weight says 220 lbs (100 kg), but our experience is that many who have are up to 350 lbs have not had a problem. We have put 350-435 lb people in it at conferences and have never have problem. We do offer a 30 day money back guarantee which also covers the chair.

The Relax® Sauna Quality Advantage​
The Relax Sauna’s advantage is its powerful radiators that exclusively emit far-infrared radiation (FIR).  The main component in the radiator is a ceramic semi conductor that excludes near and middle infrared energy, and actively radiates far-infrared light with a wavelength between 4 and 14 microns.

Ceramic Semi-conductor
Multiple semi conductors in the radiator produce uninterrupted FIR emissions. PTC resistors on the radiator’s heater assembly enable electricity to flow continuously while the temperature in the sauna chamber is kept between 140° – 170° degrees Fahrenheit. ​FIR energy is not visible to the human eye, but it is detectable as heat.
It has been demonstrated in clinical tests that FIR energy rays are highly therapeutic. ​ Human cells absorb far infrared in a range of 8 to 13 microns. Peak absorption occurs at 10 to 11 microns.​  FIR energy resonates with living biomass, optimizes cellular activity, and restores normal body processes that release toxins, and support normal health.
There are 20 of these semi-conductors in each of the two 750 watt radiators in the Relax Sauna. ​An electric fan on the back of each radiator cools the heater assemblies and distributes comfortable heat quickly throughout the sauna’s interior.  The interior of the personal sauna tent is a mirror for far infrared rays. Its silver embedded nylon material prevents heat loss and reflects far infrared light throughout the sauna chamber like a glass mirror would reflect visible light.

Body toxicity is at the root of most physical illnesses. The human body is regularly exposed to airborne and food-borne contaminants, some of which are not readily expelled from the body. When toxic gases or heavy metal toxins, in the body, encounter a large cluster of water molecules, the molecules encapsulate and trap those contaminants. Over time, as toxic contaminants accumulate, they have a dilatory effect on normal body processes. Circulation is more encumbered, critical cell functions are impaired and biochemical processes become dysfunctional.  The consequence of toxic contamination is illness.

Large water molecule clusters vibrate when they are exposed to FIR energy.  As a result, they become broken into much smaller clusters, and release trapped gases and toxins.  Normally, toxins are removed from body in urine (through the kidneys) and in sweat.  Studies of FIR saunas have demonstrated that the non water portion of sweat from test subjects consisted of the following potentially harmful substances:

It is believed that FIR sauna therapy, such as that delivered by the Relax Sauna, is seven times more effective at removing environmental toxins through sweat than are dry heat or steam saunas.  Productive sweating is a feature of the Relax Sauna.  Its narrow band of pure far infrared energy heats the body from the inside out.  Repeated use of the Relax Sauna by people who do not sweat regularly, will gradually restore inactive skins’ ability to sweat.
​
The FIR energy of the Relax Sauna is generally rehabilitative, or restorative.  FIR energy interacts, in complex ways, with biological structures in the body, including cells, cell membranes, cell fluids (especially water), and DNA/proteins, and restores the normal functionality of those living systems, and thereby, restores the normal functionality of your health.  The Relax Sauna immerses your body in a field of far infrared light and creates an efficient, therapeutic, and portable sauna experience that you can begin enjoying in as little as 30 seconds after turning it on, even while you are fully clothed!​

All text, images and other content of this document and materials are protected by copyright law and shall not be used, adapted or reproduced in any medium without the express, specific written consent of owner.
National Drug Card, 2020 PENNSYLVANIA AVE DEPT 601 WASHINGTON DC 20006